From France to Siberia: 15 international workcamps in eleven countries! 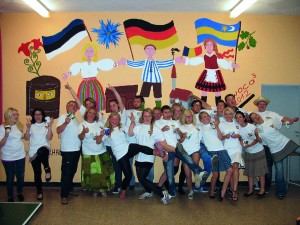 A grand European youth project will start into its 2016 action phase: More than 300 youths from 17 countries will travel to 15 international workcamps, in order to realise social and sustainable projects. Taking part are youth groups from nine cities in North Rhine-Westphalia, but also from Brandenburg, Thuringia, and Schleswig-Holstein. All of this is made possible by the support programmes ewoca³ and ewoca³(+).

Youths from Cologne-Chorweiler will take the first step: On Sunday, the 26th of June, they will meet their peers from Katowice/Poland in Morbecque/France. Over the next two weeks, and together with local youths, the will build a wooden cabin with a fireplace, where groups of children and youths can stay thereafter. The workcamp takes place in a region that was shaped by both world wars. Thus, the participants will deal with this history at historic locations, in order to promote peace, tolerance, and respect together.

Already at the 11th of July, ewoca³ continues about 1000 kilometres to the east. Young people from Unna (Germany), Latina (Italy), and Grodziszcze (Poland) will meet in Krzyżowa, in Lower Silesia. They will help with memorial preservation and documentation at a jewish cemetery. But the participants of other workcamps have a lot to do: They have planned to do restoration work on the grounds of a historical castle church in Romania, create a temporary bike workshop in Belarus, and several landscaping projects. In Florence participants will create a theatre performance, dealing with discrimination and racism. On the Greek Island Samothrace in the Aegean Sea youths will, as part of another theatre project, build an open air stage that can be used for further projects. 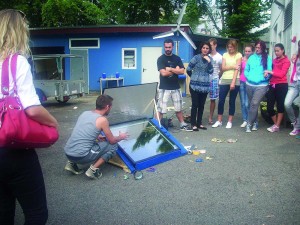 While the projects are quite different, they have a common core: „We connect charitable work with multi-layered intercultural experiences“, says Katharina Teiting, who coordinates the support programmes ewoca³ and ewoca³(+) at the International Association for Education and Exchange (IBB e.V.). „Especially now, with the political situation complicating this, we believe youths experiencing a shared Europe to be very important.“ The participating youth groups will collaborate not just for one summer, but a total of three years. Each year, they will realise a project at the location of one of the partners.

On their internet blog „ewoca³ Live“, the youths themselves report from the workcamps and write about their experiences and impression – in German and English, in order for the content to be read by international audiences. The blog can be reached at www.ewoca.org/live/.