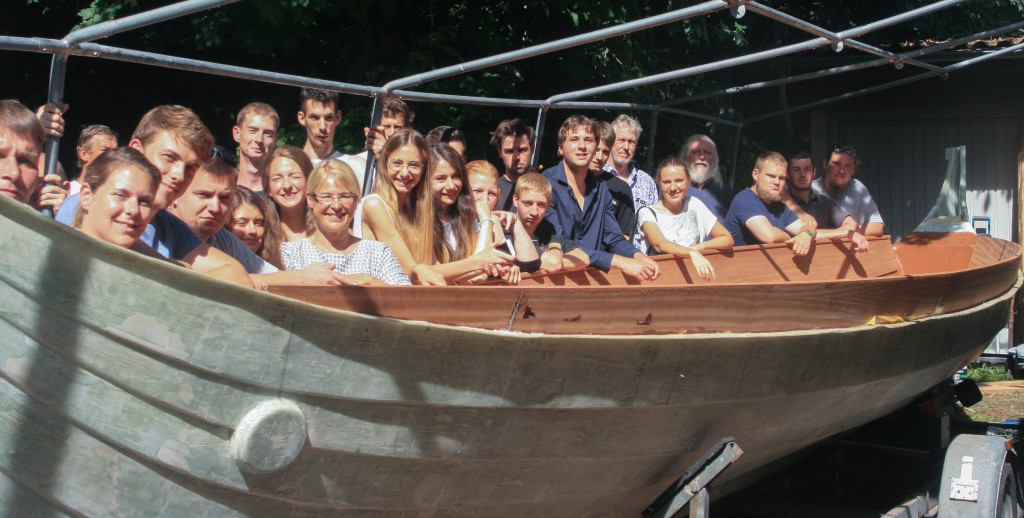 Youths from Schleswig-Holstein, Denmark and Ukraine together are building a sea-worthy viking boat – and in the meantime intensively deal with the role of minorities in Europe. On Thursday, 25th of August 2016, Kristin Alheit, Minister for Social Affairs, Health, Families, and Equal Opportunities of the Federal State of Schleswig-Holstein, visited the unusual project in international youth work.

„Of Vikings and other minorities – Experiencing democracy in Europe“ – this is the title of the tree-year project, realised by the association Alte Schule e.V. from Buchholz, together with two partner organisations from Denmark and Ukraine. Past fall, Kristin Alheit became the official patron of the project. Now, the youths presented their work to the Minister. Following this, they all took part in a discussion round on the topic of minorities in Schleswig-Holstein and in Europe.

On the occasion of her visit, Alheit emphasised the importance of pan-European youth work: „Especially in times, where European collaboration seems to have lost its glamour, projects like this show the possibility of inspiring youths with the idea of international cooperation. The viking boat is a great idea, which is also a symbol for cooperation across borders. 70 years ago, when the Federal State of Schleswig-Holstein was founded, such a close partnership, especially in the border region, was unthinkable. Concepts like this workcamp open up new perspectives and forge personal connections leaving their mark.”

One year ago, the youths from three countries met for the first time in Denmark. Now, they continued their work on the viking boat in Süsel in Schleswig-Holstein, from the 13th to the 28th of August. Next summer, the boat should be collaboratively finished in Ukraine. It will then be used permanently for international youth work there – by the association Euro-Viking e.V. of adventurer and circumnavigator Burghard Pieske.

The ship-building project is part of the workcamp programme ewoca³(+), realised by the International Association for Education and Exchange (IBB e.V.), and financed with funds from the Innovation Fund of the Federal Children and Youth Plan.

“We are happy to have such a prominent supporter in Minister Alheit and such a strong partner in Alte Schule e.V in Schleswig-Holstein”, says Elke Wegener, General manager of IBB e.V. “We are very much hoping to be able to realise projects like these in the future, with youths as great as these. They are living in their workcamp for a Europe open to the world – and they will be engaged for this after its conclusion as well.”