16th Youth Summit as part of the Weimar Triangle is intensively dealing with the topic of „Flight and Displacement – Then and Now“ September 1, 2016 Mechthild vom Büchel Experiencing Europe, News, Youth Summit The 15 German participants at the 16th Youth Summit as part of the Weimar triangle are sure to be invited to Dusseldorf again: State Secretary for European Affairs Dr. Marc Jan Eumann wants to continue the dialogue with the active youths and let them participate in finding the topics for the next, 17th Youth Summit in the summer of 2017.

On Friday, the 19th of August 2016, in Dusseldorf, a total of 45 youths from Hauts-de-France, Silesia, and North Rhine-Westphalia, employing their profound background knowledge and personal impressions, discussed with politicians from the three European regions about the situation, especially that of refugees coming to Europe. The youths are convinced: Europe has to do more! It is its responsibility to help the refugees. Refugees, for the 45 participants of the 16th Youth Summit as part of the Regional Weimar Triangle, no longer mean anonymous strangers: Refugees are people like the 21-year-old Mahelet* from Eritrea, who was about to be sent to war, and on his flight mixed water and motor oil to suppress his thirst. Or like Taufik*, 38 from Afghanistan, a former interpreter for the German army, who constantly remembers his home, which he had to flee for fear of the Taliban. Or Maria*, 85, whose flight from Silesia to Germany took a total of three years, as an effect of the Second World War, and who is still strained by persistent resentments. What drove these three and many others to fleeing, what they are doing to at least temporarily suppress their worries for their missed or deceased family members, and why waiting for an asylum decision is so demoralising – all of this, the 17- to 23-year-olds learned in their collaborative activities and encounters in Wuppertal and Dortmund. th to the 19th of August 2016, the focus of the 16th Youth Summit was the topic of „Flight and Displacement – Then and Now“. The week began with talks by Serge Palasie (Eine Welt Netz NRW e.V.), Dr. Marcel Berlinghoff (Institute for Migration Research and Intercultural Studies Osnabrück) and Alexandra Limousin (L’Auberge des Migrants, Calais). They gave impulses for looking at current migration while considering the historical background, and also in comparison with Jewish refugees during Nazi times. They explained the relationships to developmental politics and described the situation at the “Jungle of Calais”, where 8’000 to 10’000 refugees are hoping for a future in Western Europe.

On their second day in Wuppertal, the youths became “Angels for a day”: At the clothing bank of the Caritas Association Wuppertal-Solingen, at the intercultural football camp “Bola Brasil” organised by YMCA Wuppertal, and at the support organisation “In our midst”, they met migrants and activist helpers – they built contacts and gave practical help, sorted clothing and took care of the small football players from many nations. At the Wuppertal dye works, a communication centre, the support project “In our midst”, led by Helge Lindh, organised a meeting with about 40 Syrian families, modeled after the idea of speed dating. An oriental buffet, cooked by the families, and the intensive talks led to these very private exchanges at the small round tables taking many hours. Teachers and lawyers, but also unaccompanied youths told how the war destroyed their personal plans for the future from one day to the next. They reported how they are struggling to get their qualifications recognised, and how they worry about their children’s future. “Meeting youths of the same age was something very moving”, Hildegard Azimi-Boedecker, Department manager for Job international and Migration at IBB e.V., reports. Especially the contact with young people is lacking, the young conversationalists said.

Their encounters put the participants of the youth summit in a thoughtful mood. “In the end, they voice their great admiration for the enormous strength and energy shown by the refugees, by traveling to Europe on foot for long distances, learning the foreign language, and building a new life for themselves in this world foreign to them”, reports Hildegard Azimi-Boedecker. Their third day brought them to Dortmund: At the Auslandsgesellschaft Intercultural Academy, with the help of Gerhart-Hauptmann-Haus foundation, they met older displaced persons from what is today Poland, and young refugees from Eritrea, Syria, and Afghanistan. The youths became all silent, one could hear a pin drop. Many were crying when the refugees, also crying, told their stories. History is full of large migratory movements, the youths learned, some caused by persecution by the National Socialists, some by civil wars. The causes are generally man-made.

In the afternoon, the youths then helped arranging the summer party of Frenzelschule, a refugee housing facility run by Diakonie Dortmund. Activities for children, basketball tournaments, and German-Syrian-Kurdish joint dances brought the mostly young people closer together. A tarte du sucre, potato salad, and Polish pierogi supplemented the barbecue with French, German, and Polish specialties.

On Thursday, the youths had some time to collect and sort their impressions, before, on Friday, they traveled to Dusseldorf for the finale of their week full of impressions. At the state chancellery the group met State Secretary for European Affairs Dr. Marc Jan Eumann, Krystyna Jasinska, Member of the Sejmik of the Voivodeship Silesia, and Hakim Elazouzi, representative to the Regional Council of Hauts-de-France and vice-mayor of the City of Bethune.

Well-prepared, the youths asked questions, with politicians listening intently: Could a no-fly zone over Syria fight the causes of flight? Isn’t this a responsibility for all of Europe? Are the Polish capacities for admissions seen as depleted because of Ukrainian workers moving in? After a comprehensive discussion, the participants presented proposals and demands they have been working on, for being realised on the regional, national, and international levels.

State Secretary Dr. Eumann confirmed the youth’s impressions: “What we are currently experiencing with the migration of refugees has happened repeatedly in the history of Europe, connected with war and displacement; especially also in Germany, Poland, and France. Experience shows integration was and still is a major task for all of society.”

Many participants of the youth summit want to help migrants after their trip back home. Hildegard Azimi-Boedecker: “Many have seen that even small gestures and activities have major effects. The ideas of youths vary from entering political activities to volunteering at the Jungle in Calais.”

About the Weimar triangle:

The “Weimar Triangle” was founded in 1991 by the foreign ministers of France, Poland, and Germany, in order to strengthen European cohesiveness. This is also the goal of collaboration as part of the “Regional Weimar Triangle” of North Rhine-Westphalia, Hauts-de-France (created in 2016 by fusion of the regions Nord-Pas de Calais and Picardie) and Silesia. Among other activities, since 2001 a yearly youth summit takes place, rotating its location among the three European regions. For the 16th International Youth Summit, the State Government of North Rhine-Westphalia invited participants to Wuppertal. So far, about 700 youths have taken part in the youth exchange. 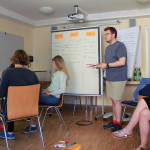 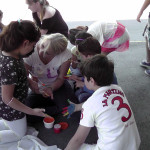 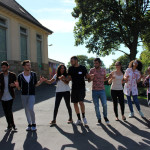 Further information about the Youth Summit: