The IBB-Projekt “Pimp my Europe” starts into its second phase: In Germany, Italy, and Hungary youths are preparing to develop common perspectives for a Europe in solidarity. But before the active youths from three countries will meet in Rome for the first time next month, they started their work at their respective locations: From the 6th to the 8th of October, the participants from Germany met for a first workshop in Duisburg. 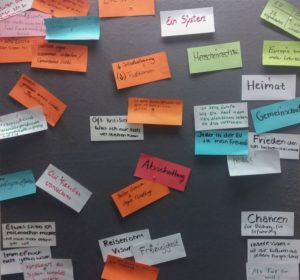 What is our connection in Germany to Europe? What changes due to the political shift to the right in many European countries? What do we have to do with Brexit and the conflict Spain-Catalonia? And what would a European refugee policy in solidarity look like? Youths spent three days intensively dealing with such questions in small groups, then presenting their results to other participants. Additionally, they got to know the educational system of North Rhine-Westphalia better, in order to compare it with other European systems in the subsequent working process.

It is quite a diverse group, which IBB and its three local project partners City of Bochum, Werkstatt im Kreis Unna, and Roots & Routes Cologne could motivate for participation: Youths and young adults between 16 and 27 years of age, with and without refugee background, of which many did not had a great deal of prior contact with politics. This will change in the coming months: Following the working meeting in Rome, a common European youth conference in Brussels is planned for March 2018.

Thus, among other things, the youths recorded video statements on European topics which sting them. These statements should then be shown and discussed at their working meeting in Rome. Additionally, the youths from three countries will meet Italian politicians, in order to exchange their proposals and expectations for a shared Europe. The project “Pimp my Europe – Level Up” was made possible by funding from the European programme Erasmus+ YOUTH IN ACTION.