He actually only wanted to visit the state parliament of North Rhine-Westphalia. Now Fabio Decker knows what it feels like to become a political person.

Fabio hails from Holzwickede and is currently doing an apprenticeship as a house painter and decorator. He is 20 years old, likes to skate, and only recently found an interest in politics.

It all began when he participated in workcamps of the International Association for Education and Exchange (IBB e.V.) as part of international youth encounters. The trigger for his interest was a visit to the state parliament, and especially the preparations for this. When his social worker asked him if he wanted to become active, his first reaction was: „Why me?“ Fabio says: „In the beginning it is complicated, as you have to get a grip first. I could have left then, and at first I wanted to leave. But then I thought: On the state and European level, you might perhaps be able to move something.“

Talking about problems in Germany 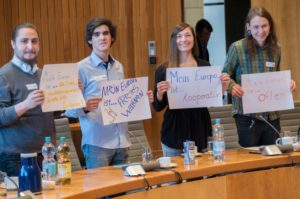 Together with other participants and in small groups, he prepares the visit to the state parliament in thematic blocks. One group focuses on the European Union, others look at foreign affairs or environmental politics. At the state parliament, they present the concepts they worked on to parliamentarians. Fabio and his group take on the topic of education. They try to refashion the educational system in theory. Fabio says: „The final product should show, how we would like our educational system to be like. In this, we tried to talk about our problems in Germany. This was also about the question of how one can better involve youths into politics, and how one can give unheard voices a chance.“

Beforehand, the youths visit preparatory seminars and rehearse the procedures. In total they spend five weekends together. They go through human rights, clarify questions, exchange perspectives, and discuss. „The team leaders really tried to get us interested to the fullest. At the youth hostel, even at night in bed we googled things and read articles“, Fabio remembers. „I would advice others to do research on the web on which organisation in one‘s vicinity is offering such programmes.“ Beside his interest for politics he also found new friends. Fabio explains: „Many people say this, but it isn‘t true that young people are not or no longer interested in politics. There are young people interested in politics. But their voices are only seldomly represented.“

Afraid of a war 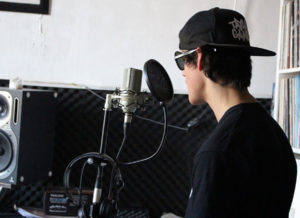 Asked for his hopes and fears for Europe, Fabio answers: „I am afraid of having to live with consequences produced by my predecessors, that Europe might break apart one day and that there will be a war.“ Fabio explains: „There are rich countries, there are poor countries. Even this is already unfair.“ He could imagine everyone getting a kind of basic income being helpful. Fabio is not sure, whether he himself would be in Germany without Europe. His parents, in the search for a better life, moved here from Portugal. In general, he thus advises looking at how other people live. He thinks, Europe could learn some more supportiveness from the Ruhr area: „How is it possible to have so different economic levels, and educational systems, given we are one Europe?“ Fabio proposes to rethink the concept of Europe: „In order to become a real community, we have to take along each country. Perhaps we need a European constitution for this.“