While her parents come from Poland, Natalie Kajzer, a white, blonde woman speaking German without an accent, is an „invisible“ migrant.

Natalie is 25 years old and lives in Essen. She studied Art, Spanish, and Catholic Theology, and is now teaching with a passion. Natalie was lucky: Her family was highly educated. Both her mother and grandmother studied at university, her grandfather was a professor. He worked as an engineer in Turkey and alway preached to discriminate nobody for their religion or skin colour. Natalie says: „I had problems with xenophobia, but not with racism.“

Her parents migrated, as they had experienced a situation in Poland where people were afraid and could not speak their mind. During the time of the Iron Curtain and Russian control, they see no chances for their children to rise. As the first child of the family, Natalie is born in Germany. Despite their university degrees, the parents have to fight in Germany. The German authorities do not even recognise their high school diplomas. „Back then I always asked my mother if we can‘t go back. Even though I am now happy for this, and I understand: As a child, I could not comprehend why we left“, Natalie says.

Happiest on the move 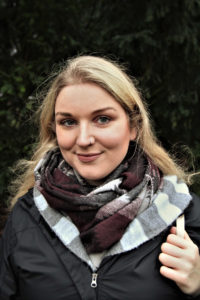 Natalie trained to become a teacher: Now she is teaching German as a foreign language herself. Foto: privat

While Natalie was socialised in Germany, she grows up in between two countries: During vacations and long weekends, she goes to Poland. „Other children had their family around them all the time. I did not always see my friends and family. This is why, as a child, I often weeped bitterly. Back them I felt happiest on the move, for example on the highway.“ Her grandparents are still crying to this day. Natalie explains: „Back then I always planned to be back sometime. But that is not how it works. I experienced myself, what a child leaving means for its parents. It‘s not possible, on gratefulness alone: They did it for us. Today I can understand it, say Thank you, and mean it like that. Perhaps today I would be the one leaving, and leaving someone hurt.“

Natalie describes Poles as „invisible migrants“, as they are so very much assimilated in Germany. Many Poles of her generation got from their parents – and those from the monolingual majority of society – the impression of bilinguality being something bad. As someone with a non-German speaking family at home, Natalie is an outsider at school. Her primary school teacher initially don‘t want her to go to a grammar school, because of her parents not speaking German. Finally her parents place her at the best grammar school in the city. This experience was a major motivation for Natalie to achieve an additional qualification for teaching German as a second language.

She recalls: „I remember how proud I was for knowing the word „Kümmel“ [caraway seed], as for quite some time I only knew the Polish word.“ Especially with concepts from a domestic context, knowing them was especially notable. Natalie explains: „You feel excluded if you are unable to express yourself. As a child, you notice teachers thinking you are something bad. But you are not from a bad family, only because the family comes from another country and has another culture. Still, I was lucky for my white skin. While I had problems with xenophobia, I had none with racism.“

In Poland as well she is considered different, not one of them: „I talk differently, know no slang, only high Polish. You are not really German, and on the other hand also not really Polish.“ She summarises: „I am German-Polish, but I see myself as a European.“ The more the athmosphere in Poland becomes hostile to the EU, the more Natalie worries for Poland to close its borders, or the EU to expel Poland from the union. „Back then, there was a campaign in Poland, showing the EU as colorful and with many advantages. It is hard to represent a country culturally, that rejects Europe so much. For Germany, as well as Poland: Europe is plural.“