Auschwitz – the symbolic place for the systematic mass extermination of Jews – had been already visited by the teaching professionals with groups of pupils several times. But the travelling group only just got to know places of learning in Eastern Poland, like Majdanek and Bełżec at the most recent training of IBB e.V. in late autumn 2017. „We were interested in seeing how teaching professionals with lots of experience in memorial excursions see these places of remembrance“, described Agata Grzenia, division head at IBB e.V. And the final verdict was extremely positive. „Very suitable for excursions with youths“, was the unanimous opinion. 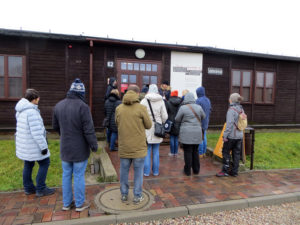 Visiting a place of remembrance far exceeds what history lessons in schools can convey. The eleven teachers from North Rhine-Westphalia, taking part in the further education training from the 24th to the 26th of November 2017, know this. But the teaching professionals are interested in the question, how places of learning can be made accessible for explorative learning, and what kind of materials, and which points of contact they provide.

The location of the camps Majdanek and Bełżec in what is today Eastern Poland is a peculiarity, as they used to be located in the General Governorate, where the Nazi terror was especially common. „The behaviour of Germany as an occupying force becomes much clearer“, reasons Kristina Hegemann, a teacher at Karl-Kisters-Realschule Kleve, at the end of the further education training.

Well accessible at the edge of Lublin, and visited by only a few tourists, Majdanek harbours unique exhibits and impressions in a quiet setting. The remaining barracks of this oldest Holocaust memorial in the world, opened already in 1944, make it easy for visitors to dive into history. Pupils can empathise and understand how those deported here had to suffer. With the help of historical documents, paths of suffering from the cities of the Ruhr area to Majdanek can be retraced and comprehended. Well-preserved letters convey insights into the hope of camp prisoners. And the long lists of those murdered then document how elusory these hopes were. But at these locations there is also a lot of information about the perpetrators.

Majdanek was the first German concentration camp in the General Governorate, where between 1941 and 1944 at times up to 25 000 prisoners were confined, and about 78 000 people were murdered. In the visitors centre, there are seminar rooms and a lot of formatted learning material for pupils; for visitor groups from Germany also in German language. A German-speaking pedagogical professional assists with classification and evaluation. 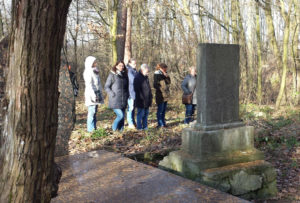 On the bus trip to the extermination camp Bełżec, about 130 kilometres from Lublin, one passes the towns of Izbica and Zamość, where one should also stop for a visit. At first sight, Ibzbica seems like a small, contemplative town, but looking again, one notices the deep scars of the past. The once large Jewish community of Izbica was nearly fully exterminated. A visit to the former Jewish cemetery illustrates the history of Izbica in a depressing way.

In Zamość as well, in the seemingly Mediterranean old town, it seems hard to imagine what happened here 75 years ago. 1942, Heinrich Himmler in his role as Reich Commissioner for “Festigung deutschen Volkstums” [consolidation of German cultural identity] declared the county of  Zamość to be the first German settlement area, which was to be “germanised”. The population was to be partly resettled, partly murdered, in order to accommodate around 60 000 German settlers. Around 110 000 poles from 300 villages were displaced and “selected”: Those able to work were assigned for “Regermanisation” or pressed into forced labour in Germany. People over 60 or under 14 years of age, were sent to so called “Rentendörfer” [retirement villages]. “Rentendörfer” was the name given to Jewish settlements whose inhabitants were deported to extermination camps – as had happened in Izbica. There, thousands of children and elderly people starved or froze to death after their forced resettlement. The children deemed eligible for “Aufnordung” [raising to the level of the North] or “Eindeutschung” [assimilation into the German people and culture], were brought to children’s re-education camps, where they were germanised and then, provided with forged birth certificates, given to German families. The fourth group was deemed criminal or anti-social, as they resisted, and were directly deported to extermination camps.

Not far from Zamość, one arrives at the memorial site of Bełżec, where, like in Majdanek, one needs an appropriate time for a visit. The extermination camp of Bełżec was built in 1941. It’s only purpose was the murder of the Jewish population of the area around Lublin, from Galicia, Krakow, but also from Germany, Austria, and Czechoslovakia. Until the end of 1942, 500 000 to 600 000 people, mainly Jews, were killed here; afterwards the camp was destroyed. 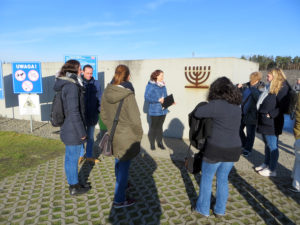 A German-speaking tour makes the area of the modern memorial accessible. The visit to the site enables a deeply moving and jarring experience. The multimedia exhibition at the attached museum deepens the impressions and concludes an intensive day, which continues to have an effect. “Bełżec ist a silent place inviting reflection”, says IBB division head Agata Grzenia. The memorial is planned in such a way that it literally overwhelms visitors.

“Both camps complement each other well”, says Maren Niemayer, teacher at the European School in Oberhausen, about the didactic presentation of exhibits; “Majdanek with its well-preserved camp structures and the contrasting more museum-like memorial Bełżec.”

Further information about our concept and our offerings “Looking for traces of National Socialism” can be found here.