Teodora is young, educated, and she comes from Bulgaria. In Germany she tries to live a family life across national borders. She fights prejudice with humor and cultural exchange.

Teodora Yankova is born at the Black Sea in Warna, the third-largest city in Bulgaria, 2250km from the Ruhr Area. She attends a high school focused on extended language acquisition. From the fifth year on she focuses on German. The programme: Language, cultural studies, history.

She then studies European studies at the University of Sofia. And even though the young woman often hears acquaintances describing Germans as polite, but distant, she decides on an Erasmus exchange semester in Saarbrücken, shortly before the end of her studies. She says, today she knows that there are indeed also hospitable and helpful Germans. 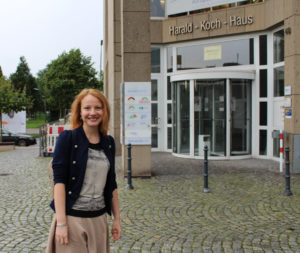 Teodora on her way to work at Auslandsgesellschaft NRW e.V.: For her cultural exchange has become a job and a passion. Foto: Chantal Stauder

During her university studies, Teodora participates in three programmes for EU youth encounters. In camps in Cyprus, Spain, and Macedonia she meets young people from all over Europe. The youth encounters take her picture of other nationalities and turns it completely upside down. What she thought to be national characteristics turn out to be prejudices and clichés.

By now the 26-year-old has more international than Bulgarian friends. She smiles: “I have learned one thing: You should not listen to what other people say. You definitely have to make your own experiences, to get a picture for yourself.” The Bulgarian is so excited that cultural exchange becomes her passion. “This way you experience time more intensively. You do not forget these experiences, as you collect them yourself first-hand, directly from the source.”

The pervasive image of poor migrants

Today Teodora works for Auslandsgesellschaft NRW e.V. in Dortmund and now lives a European family life: Her sister lives in London, their parents in Bulgaria. Teodora uses her freedom of movement and shuttles back and forth. Teodora knows that there are only few, who can relate to her lived reality.

Being European in this way is part of the experience of just a few. She asks, if this is the reason why so many people misunderstand the idea of integration. “Integration does not mean to forget where you come from and who you are. Successful integration means feeling at home in and being able to identify oneself with both contexts equally.”

What do Germans learn about Bulgaria? 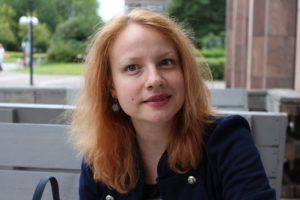 The 26-year-old advises to make your own experiences. The ideas of Bulgarians being poor, and Germans being distanced and cold are prejudices. Foto Chantal Stauder

Many people who hear about her coming from Bulgaria, connect this to images they have seen on the news. “The image of many is of migration because of poverty.”

At a job interview she gets asked of her opinion on why so many Bulgarians and Roma come to Germany, and what conditions would keep them away. Teodora thinks of her friends who are working, who have studied Medicine and Pharmaceutics. She knows the idea of everyone coming to Germany being poor to be a prejudice. Her reality is characterised by other facts.

For Teodora the interest of many Bulgarians is driven by curiosity. Germany and other European countries are part of the curriculum in many Bulgarian high schools focused on languages. The same is only rarely true for the other direction. “If you ask Germans about Bulgaria, their knowledge is often not more than the keyword ‘former eastern bloc’. In most cases they even forget the  ‘former’”, Teodora says.

As a Bulgarian she is sometimes confronted with prejudices in her everyday life in Germany. Embarrassments, which make her laugh nonetheless. “For example, some people make really weird compliments. They say: You are much to pretty to be a Bulgarian.”

Others are astonished of her good German language skills. Something which probably would not happen to Germans in Bulgaria. She adds, encouragingly: “Germans should be honoured by other people showing so much interest in their country. They could be a role model for how to welcome other people.”