On Sunday, 22nd of October 2017, the project “Europe4Refugees – follow the routes” commenced in the Southern Italian town of Cosenza: As part of a strategic partnership, seven partner organisations in the field of adult education from five countries will closely collaborate until November 2019 in order to reach one goal: A practically-oriented country comparison on the situation of refugees. A special focus is put on the perspectives of Non-Governmental Organisations (NGO) and Education providers working with refugees. 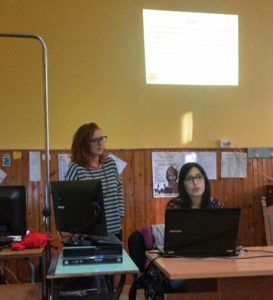 At their first meeting in Calabria, the NGO La Kasbah onlus is hosting its partners from the 21st to the 25th of October 2017. On Sunday, 22nd of October 2017, the programme featured an initial tour of the provincial capital in the South of Italy. Cosenza presented itself with bright sunshine and a mild 21 degrees Celsius as a small, cosmopolitan, modern town with an attractive historical town centre, and an open-air museum for modern art. For the last few years, several thousand refugees arrive here each year, mainly from Africa.

On Monday, the 23rd of October 2017, representatives of the partner organisations met for their first seminar session and got to know each other.

Enza Papa, the organiser of the first visitor programme on the side of Assoziazione La Kasbah onlus, presented the Italian system of reception and registration. The lawyer Franco Cirono, supporting La Kasbah onlus with his expertise, answered a lot of questions, especially those related to dealing with the Dublin II regulations. Is it always possible to send refugees first registered in Italy, who then traveled on to countries in Northern Europe, back to Calabria. General questions concerning rights of residence and family reunions were also central. Emanuela Carmina presented a programme on how to empower refugees and Diana Gatto the language courses and other elements of adult education on offer. Emilia Corea finally reported on the health system for migrants. 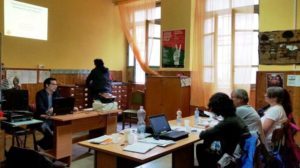 In the afternoon, two refugees from Africa and Afghanistan presented a successful empowerment project: Here, refugees with recognised rights of residence  are trained to become experts for refugee questions, who can then consult newly-arrived refugees with their general questions regarding finding accommodation, housekeeping, but also on their job qualifications. The person born in Africa, now an Italian citizen, reported on his finding a job in Milano. However, he came back to Cosenza in order to dedicate himself to social work with refugees. Assoziazione La Kasbah – it became clear already on the first day – consults refugees in phases and on all steps of their integration, and especially also in cases where their requests for asylum are rejected.

On two further days of seminar sessions, the partners will meet local experts for an intensive exchange of experiences.

The project “Europe4Refugees – follow the routes” is funded by the EU programme Erasmus+. The project coordination of the newly-developing European network of Educational institutions is located at IBB e.V.

The project partners  of “Europe4Refugees – follow the routes” are:

The Mosaik Support Centre for refugees and local population in Lesbos.

The Dialogos Consulting centre for education and career with headquarters in Thessaloniki.

The multi-ethnic, cultural association La Kasbah with headquarters in Cosenza.

The Subjektiv Values Foundation from Budapest.