The 17th youth summit in France was all about fake news 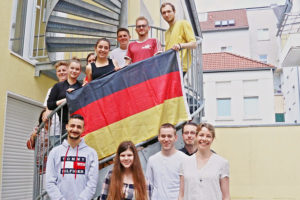 In these days 15 youths from Alpen, Alfter, Beckum, Datteln, Dortmund, Düren, Dusseldorf, Gelsenkirchen, Hagen, Hattingen, Leopoldshöhe, Monheim and Solingen, all towns in North Rhine-Westphalia, are packing their bags for a special trip: On Sunday, they will, invited by the State Government, travel to the 17th International Youth Summit as part of the Regional Weimar Triangle. They are accompanied on their way to France by a team of the International Association for Education and Exchange in Dortmund (IBB e.V.).

This time their destination is the small town of Wattignies in Northern France, to the South of Lille. There, from the 15th to the 21st of July 2018, the 17- to 23-year-olds will intensively work for five days, together with their peers, dealing with the topic „From propaganda in 1918 to fake news in 2018 – How can I become a responsible European Citizen?“ Targeted misinformation is considered an attack on democracy. For this reason there is even a discussion in France about banning fake news.

A first introduction to the topic was given to the youths at their preparatory meeting in Dortmund. Monika Elias of Grimme Institute in Marl and the team of IBB brought the consequences of misinformation in 1918 to mind, starting with the alleged bombing of Lviv to the „Dolchstoßlegende“. And while 100 years ago misinformation and propaganda was spread by leaflets, wall newspapers, and newsreels, today it is trolls and social bots on the internet. Monika Elias brought a number of tools for demasking fake news with her: Beginning with a critical look at the sender of information, followed by the HoaxMap and reverse image search, to the results of professional research teams like ARD Faktenfinder  or Echtjetzt by Correctiv .

Together with youths from Poland and France, the European view on the topic will be discussed and presented to politicians from the regions of Silesia, North Rhine-Westphalia, and Hauts-de-Frace on Friday, the 20th of July 2018. In addition to the collaborative work on the topic, a diverse leisure programme in the hosting region Lille has been prepared. Already on the first day, the World Cup finals are on the programme. Perhaps, after Sunday, the youths from the current world champion will be hosted by the new world champion France…

About the youth summits as part of the Regional Weimar Triangle

The Weimar Triangle, from which the youth summit emerged as a valued and sustainable result, was founded in 1991 by the foreign ministers of France, Poland, and Germany, in order to strengthen European cohesiveness. Since 2001, the youth summits as part of the Regional Weimar triangle are hosted yearly by the three partner regions North Rhine-Westphalia, Silesia, and Hauts-de-Frace (prior to its fusing with the Picardie region in 2016 , this was the region Nord-Pas de Calais). The encounters create contacts between young people from the three former mining regions, overcoming national boundaries. This year, France, with the Conseil régional des Hauts-de-France, is hosting the international youth encounter. Already about 900 youths took part in the youth exchange.