IBB e.V. always works on overcoming boundaries. With our new European column, we react to the re-establishment of borders within the European Union, and the EU as a project for peace being increasingly questioned by many people.
Since September we tell the stories of people describing their everyday experiences in and with Europe. Stories inspiring thoughts on the positive aspects of European collaboration for each and everyone of us.

Europe is right in front of us – we just have to notice.

Dortmund is a “Europaaktive Kommune” [a certificate for municipalities active in European matters], the column is thus backed not only by IBB, but also by Auslandsgesellschaft NRW, Jugendring Dortmund, and the City of Dortmund. The European column is published monthly as part of a media partnership with coolibri, the well-known city magazine, and then on our website.
We want to thank all of our interview partners, those who have told their stories or who will tell them, and the author of the column, Chantal Stauder.

It was in 1973 when Great Britain became an EU member state. The same year, a young Brit migrates to the continent because of his first wife – a German. Thus John Brogden from Whitefield near Manchester becomes one of the first Brits enjoying freedom of movement as an EU citizen. 43 years later a small majority of Brits decide on leaving the EU. Brexit was thus the impulse for John to apply for German citizenship. 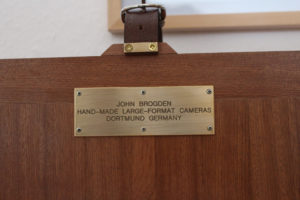 Metal plaque on one of the cameras: John sees himself as a European and Dortmunder. Foto: Chantal Stauder

Golden, sparkling, looking valuable: The all upper-case text “John Brogden, hand-made large-format cameras, Dortmund, Germany” on small oval-shaped metal plaques gracing the hand-made cameras of the Dortmunder by choice. Now, this European of the first hour lives with his second wife Odile in Dortmund. She came from France, and both are working as translators in the Ruhr area.

John worked at a translation agency in Dusseldorf, until he became a freelancer in Dortmund. In the state capital he comes into contact with art, culture, and especially photography, something he is fascinated with to this day. He learns about the mechanism of analogue cameras, and starts building elaborate large-format cameras. Today he sells them as an explicitly local product from Dortmund.

Thinking of Europe, the polite, joyful Brit thinks about a feeling of togetherness and the melody of Ludwig van Beethovens symphony “Ode to Joy” comes to mind. John is beaming and he says: “I really like living in Germany. For years I wanted to apply for German citizenship, but there was no urgent reason to do so. Since Brexit I feel lost on the continent as a Brit, and, as a European by heart, somewhat without a country.” John knows that he is lucky: Brits living in Germany for less than eight years are not allowed to apply for German citizenship.

The now 75-year-old was born during World War II and studied German and French in Leeds. Following his studies, his work brings him into contact with foreign countries again: John works for a company producing sand blasting booths, first as a foreign correspondent, then as head of exports. In this context he represents his employer on industrial trade events – especially in Germany and Austria.

Still convinced by the European Idea 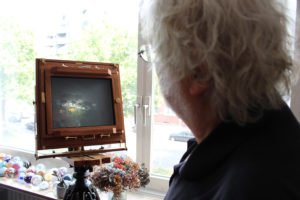 On its head: John shows the mechanism of his cameras. Foto: Chantal Stauder

During his university studies he goes abroad for a semester, to Göttingen, where he meets his first wife. The two spend nine years together in Leeds, until they move to Germany in 1973. John’s time as a European begins. He is fascinated: Governments cooperate, so people can travel without border controls. Those crossing different European countries no longer have to procure the local currency in each country. National borders shift into the background. Expensive tariffs on imported goods from other countries are removed. Merchants can offer their goods cheaper.

The German Brit is still convinced of the European idea 43 years later: “I believe Brexit to be political, social, and cultural suicide.” But he also understands those who are angry for being laid off by their employers moving production to countries where they can pay lower wages to their employees.

Europe can learn from the Ruhr area

John also thinks about some relatives he suspects having voted for Brexit: They only slowly realise the  effects of the departure. The Dortmunder says: “Brits know too little about the advantages of the EU. The EU would need a kind of advertising agency promoting it.” The 75-year-old also believes British politicians have not understood Europe: “They do not talk of cooperation, but only of the leading role which Great Britain should play in Europe.” Through departing the EU many products in Great Britain will become more expensive, as they can not be produced within the country, but have to be imported. John’s enthusiasm for Europe is similar to his excitement for the Ruhr area. He thinks: “The Ruhr area has managed something Europe still has to learn: Successful Integration.”